When I was in secondary school, I needed to do book reports as homework in the English subject. In a particular week, when I was browsing the book shelf in the library, I was attracted by the title “Swimming To Antarctica”, as common sense dictated that Antarctica is icy and it shouldn’t be possible to swim in it, then borrowed that book, read it and did my book report.

At that time, I was not a swimmer – although I could swim as a survival skill, I didn’t do any serious swimming. I was a competitive programmer at that time. When I read the book, I had no idea what she was writing about for most of the chapters. What I understood from the book was that, at the beginning she loved swimming in conditions where others screamed to get out in squad training, then she swam channels all around the world, then she got pulled from a swim even the environmental condition was not that bad, then she became a research subject on extreme cold water swimming. I just knew she was incredible but didn’t really have any deep feeling as I was not a swimmer myself.

However, the story of swimming across the Bering Strait truly inspired me. The Bering Strait was known as the “ice curtain” in the Cold War, separating the free world and the communist world, comparable to the Iron Curtain dividing East and West Germany. The nearest points between the U.S. and Soviet Union were between the Diomede Islands, which are only 2.4 miles (3.8 km) apart, i.e. Ironman swim distance. However, the sea was only 38°F (3°C), which a normal person would become incapacitated within minutes in such temperature and drown as a result, let alone swimming it. She was determined to make the impossible happen, despite the paperwork for Soviet Union took her years, she didn’t gave up and the chance to attempt it finally arrived when Soviet Union started the reform under the leadership by Mikhail Gorbachev.

The swim itself was really brutal, she was attempting unprecedented distance in ice water between two hostile countries, literally gambling with her life to help easing tension across the curtain. “I believe that this swim will create a thaw in the Cold War. I cannot fail. If I die doing this, the Soviets will regret giving me permission to make this swim”. The swim was arranged that the guides would lead her to the Soviet border, at that point the Soviets would meet her and lead her to shore, as the guides could never venture across the border for decades in the Cold War.

“They have no idea how frightened I am. They don’t know what’s happened before. I don’t know how long I can last.”

Sorry, I can’t imagine how frightened she was at that time. From the moment when one enters ice water, the time bomb is ticking, but once she made her decision, she was swimming literally for her life and giving up was not an option in the middle of Bering Strait. The idea of swimming for unprecedented distance in ice water itself already frightens me to death, and I am not even talking about the logistics for a hostile country here.

We all know the final ending that the Soviet Union disintegrated a few years later. After reading this chapter I dared not continue to read the remaining two chapters at the end (including the one to Antarctica) because I was already scared by reading the text alone, and truly impressed by this single story.

The above was all my understanding from the book, 9 years before when I was not a swimmer. I tried to start swimming in 2014, and got serious in 2018. Within less a year I started squad training, I am already swimming distances which others don’t think of swimming them, like 5 km, 7 km, etc., and I will do my first marathon swimming (defined as >= 10 km) race next month, which, if I can complete it, will be half a year earlier than I originally expected when I set the goal for myself – complete a marathon swimming race by March 2020, which is considered too ambitious by other experienced swimmers and they think that I should allow a few more years to attempt it.

However, I’m a very competitive person growing up doing various competitive sports. I had been in the Hong Kong team for competitive programming when I was in secondary school, and I has been in the Hong Kong team for trail orienteering in recent years. I now consider those people telling me to delay or suspend my marathon swimming goal jerks, after I started a thread on Marathon Swimmers Forum and was given encouragement to go for it, and I’m training for that accordingly.

I feel that I may be a strange person – the longer, colder and rougher my swim is, the happier I am:

I now believe I may share some common traits as described by Lynne in her first chapter, which eventually led her to all her achievements. However, it is too early for me to think of all those big things like swimming the English Channel as I still haven’t completed my first marathon swimming yet. Also, unlike in the U.S. where the sport of marathon swimming is well developed, there have been no Channel swimmers from Hong Kong to date digging through the finishers list.

As I am going for another trip to Europe in July, I’ve decided to buy a book to read during the long-haul flights as the in-flight entertainment is too boring, and I have taken that airline many times already. Someone suggested this book “Swimming To Antarctica” when asked for recommendation on a book related to open water swimming, and as Lynne has become my hero after I read her story swimming from the U.S. to Soviet Union, I decided to buy this book from Amazon, take it on my trip to Europe just before I do my first marathon swimming race, and re-read it from the beginning from a swimmer’s perspective. 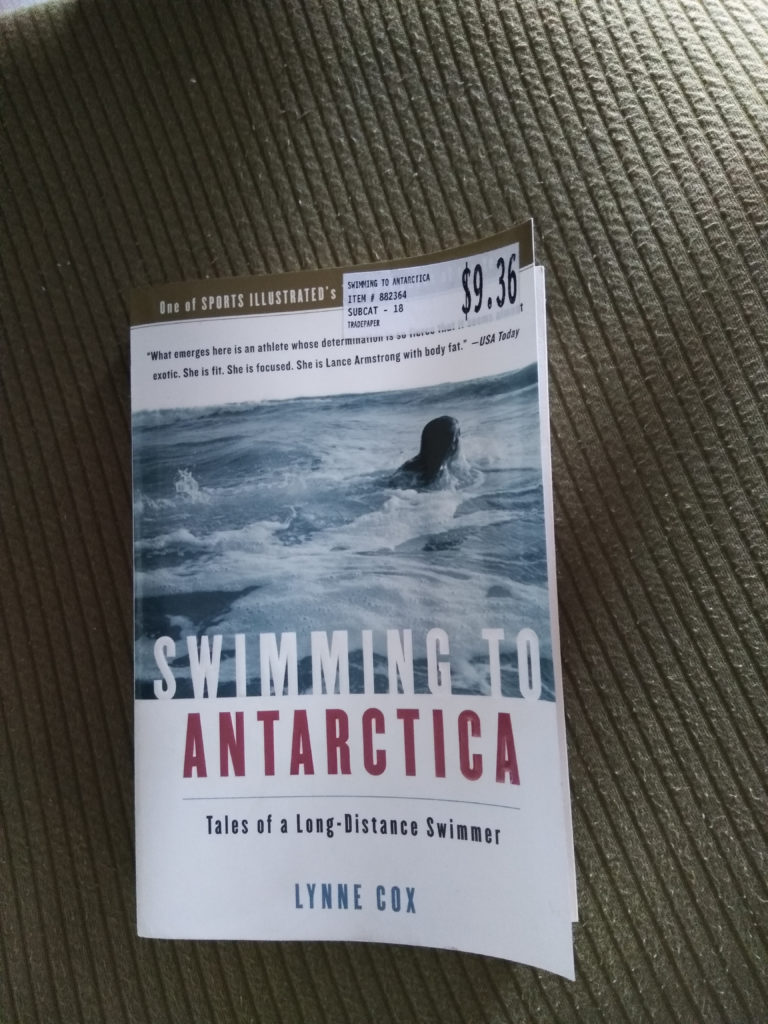 I am now reading chapters 1, 2 and 3, from her childhood to her preparation for the Catalina Channel, and comparing myself to her. Although I started swimming much later than her (I only started in recent years in my 20s) and don’t have as many opportunities and resources as her living in the U.S. (apart from the 10 km national team, I don’t know any marathon swimmers in Hong Kong who isn’t a foreigner, and apart from triathletes there is seldom any interest in open water swimming), I don’t believe these differences will limit my potential. I’m going to read it thoroughly, chapter by chapter, before my big swims corresponding to my progress in marathon swimming, in order to motivate myself to go on and keep swimming. I will probably be reading until chapter 3 before my first marathon swimming next month as I think it is too early for me to read on, and hope that I can achieve my goal by then.