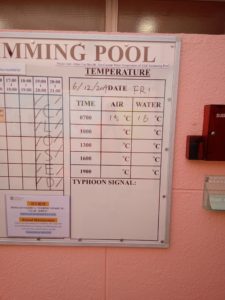 As winter comes, the unheated university pool that I regularly swim in has now cooled down to my target temperature 16°C for my “cold” water training. (channel swimmers, please don’t laugh at me – 16°C is considered cold in subtropical Hong Kong, people put on their wetsuit here even in 22°C water)

Although before I started my swim training I tried swimming in water as cold as 13°C, and I even tried a few short swims in single-digit temperature when I visited Europe early this year, I was not training seriously at that time. Last winter when I just started my swim training, I hoped I could swim up to 2 hours in 16°C by the end of season, then 6 hours this winter, however it was record-breaking warm that the sea never reached 16°C in the whole season, which the lowest temperature I could swim in last year was 18°C. The unheated university pool also didn’t get cold last year as well, from my record the pool temperature went down to 17°C only once in the whole winter, and it stayed above 19°C every other time I swam. The only day when the pool was 17°C I did a 1500 m T/T, however the result was nearly 3 minutes slower than 2 weeks before in 22°C probably because the cold affected me so much. As a result, I couldn’t do any cold training last year.

For marathon swimming, in my opinion there are few things to be trained for:

At the beginning of this year, I made a goal for myself to complete marathon swimming by March 2020, with Cold Half as my target race in mind (although I ended up completing my goal using another race – the Cold Half may be the coldest and most challenging swim in Asia but I couldn’t find a better marathon swimming race in Asia). Therefore I formulated a plan to progressively increase my training until the level for marathon swimming. Now in November and December, I’m reaching my final peak training period with weekly swimming amount above 15 km, or even 20 km, and doing 4 – 5 km sets consisting of mostly hard intervals in a session (for example: 6 x 200 m, 8 x 100 m and 6 x 200 m on CSS + 10 (including rest), with 600 m recovery between sets).

Last winter I wanted to do about 5 km in 2 hours in 16°C sea, but the temperature was never reached. This winter my training goal is to do about 15 km in 6 hours in 16°C, which roughly corresponds to my expectation for Cold Half (although in 2020 the race will be held relatively early in the season, which I expect the sea temperature will be about 18°C – it was 15°C in 2018). Coincidentally, 6 hours in 16°C has a significance in marathon swimming world – it is the qualification requirement for English Channel swimming as stipulated by CS&PF, which I consider I will be ready to start the training and be ready in a year when I can meet it if I want to swim the English Channel. In reality, this race also attracts people to do it as preparation of their channel swim as well.

This winter it has got cold early in December that the Observatory issued the Cold Weather Warning as early as 4th December, correspondingly the unheated university pool has got cold as well (although the sea is still much warmer at 21°C currently – swimming is a great way to escape from the cold!) that I’m now doing my training in cold water, doing the hard sets suggested by Lloyd after I told him that I couldn’t catch up the group of marathon swimmers in Hong Kong who are about 20% faster than me. Compared to a few days ago when the pool was at 19°C, I was still doing my interval sets well at the beginning of today in my target temperature 16°C, although I couldn’t finish my 3rd main set due to fatigue. (There were a few possible reasons: the fatigue was building up doing consecutive days of hard swimming, the sets I did were progressively more difficult over these few days, or the colder water affected my recovery between sets because I couldn’t go easy to avoid getting cold) Therefore I can now say that the cold will not be a major concern for my upcoming race given a few more weeks of hard training in this temperature.

For the 5 elements to be trained for marathon swimming, distance has no longer been a concern for me since July when I did the race from Lausanne to Évian which was at a similar distance, speed has also become a less of a concern as shown in the recent improvement in my times after October, and the rough water has never been a concern because that’s my home water. The temperature also seems now to be manageable as long as I continue my training in December and January. The final item, nutrition, is supposed to be sorted out in a long training swim (about 10 km) with my support paddler Gary Lui, who gave me a few lessons to improve my swimming early this year, and participated in the Clean Half in October together as a relay team. However, unfortunately he is not available anytime before the race so my only preparation on that are the training swims done in April or May this year, which I think they may not be enough as there were some details which we didn’t sort out satisfactorily, and the training swims at that time were not long enough, so I can only hope that it won’t go wrong using the same methodology as tried before.

I have signed up for the Cold Half already, in the solo non-wetsuit category. However, in the past few years there was only 1 man participating in this category so there was no real competition, which I don’t want to happen again. I highly recommend this race to all cold water marathon swimmers in Asia (if you are a warm water swimmer, there is also a wetsuit category available as well) so we can have some competition. Moreover, I’m looking for some people with similar speed as me (about 82 minutes for 3.8 km, or 110 minutes for 5 km) to do a long training swim (about 10 km) with me as my final preparation before the Cold Half as well, so let me know if interested as well.