In the Easter weekend I went to South Wales, with a group of friends, Himmy Lao, Jason Wong and Mikołaj Dutkowski, to participate in one of the major orienteering race series, the JK. There were 4 consecutive days of racing from Good Friday to Easter Monday.

We all lived in different places, with me lived in Bournemouth, Himmy and Jason lived in London, and Mikołaj came from Poland, so we met at Bristol and travelled together.

Racing started with a sprint race at Swansea University in the afternoon. Therefore we all travelled in the morning. Himmy and Jason took a coach from London to Bristol, Mikołaj took a flight into Bristol airport and connected to the airport bus to the city, while I used a train from Southampton. We then travelled together to Bristol Parkway changing to another train to Swansea, then a bus to Swansea University. There was a council-sponsored offer that all buses within Swansea were free to use by everyone so we didn’t need to pay for the bus between the train station and the university. Buses normally enter the campus itself, however, as a result of the race, traffic was shut so we alighted just outside the university.

We all raced in the M21E elite category, which had WRE status. Routegadget is here. Not long after I started, after control 6, I made a massive mistake (followed the wrong line back to 1 instead of going to 7). After about half of the race, there were 2 controls (14, 15) on the back hill which I felt a bit pointless with the only purpose being slowing down runners, where if a control was placed at the bottom instead, the same route choice challenge would still exist but without slowing me down. After the hill into the park (control 16 and beyond), I was totally lost not being able to adjust to the fine terrain after high-speed running in the university, and stopped a few times to relocate myself.

I did the PreO sprint in Singleton Park afterwards, and I made 3 mistakes out of 18 controls, ranking the 13th out of 50.

We then went back to Newport by train afterwards. Jason booked us accommodation in Stow Hill, which was 2 rooms only without kitchen access.

The arena was in Brynmawr Foundation School. However, as there was no parking nearby, the organiser told us to travel to Rassau Industrial Estate and use the organiser bus. There was a direct bus X15 from Newport to Ebbw Vale, travelling via Brynmawr and Rassau along the way, so we bought a group day ticket at £17.40 and used the direct service.

After we got there, I did the PreO first, which was held just south of the A465. However, as there was a lack of volunteers, the race was delayed for a while. There were 22 controls but 2 were voided, and I got 2 mistakes, getting 18 points out of 20, with 5 participants having full marks.

I participated in M21S class in the FootO middle race, while my 3 friends all did the M21E elite class. My Routegadget is here. Not long after the start of the race, I had already had no idea where I was going from control 3 to 4, and eventually had to return back to relocate. Then from 4 to 5, my intention was to avoid the marsh by going south but I also couldn’t do that, instead I got across the marsh which made me slow. And I went very slowly for the remainder of the race and completed in 1:36:27, 150th out of 152.

The arena was actually within walking distance from Brynmawr bus station so we walked directly back there without using the organiser bus. However, we didn’t see other competitors taking the same public bus between Newport and Brynmawr as us from / to Newport, despite the field size being 2000+.

We went back to Newport to have a dinner, after that, I travelled back to Bristol to pick up a hire car as public transport wouldn’t work for us on the coming days. I am a member of Co-wheels Car Club, with dozens of cars in Bristol, however, in that weekend the availability actually ran out with me picking up the last available car, which was a manual. Although I passed my licence on a manual, all my subsequent driving experience on cars were on automatic, as a result I didn’t have a smooth drive and stalled the car a few times in junctions and roundabouts, e.g. accidentally selected gear 3 when I needed to change into gear 1.

Some of my friends were starting early on the day, and as it was a Sunday, the first available public transport was too late for us so I drove a car to bring everyone to the race.

I hadn’t sign up for the long race as when I signed up, the relay team formations hadn’t been decided yet. My intention was that I would go home after day 2 if I couldn’t join a team. Eventually I joined a team in my club so I stayed there. I made an entry on day for the light green course and did that, while all my 3 friends did the M21E elite race.

Mikołaj would fly from Stansted at 21:00 so the time was tight. If he waited for us to complete the race he would need to take the high-speed train from Bristol Parkway to Paddington to have enough time, but it was much more expensive than coach travel. As a result he left early and got a lift from someone else to Severn Tunnel Junction where he could take a train to Bristol then take a coach.

Himmy suggested to visit Clevedon Marine Lake after the race where we could have a swim, so we went there afterwards by car. I swam for about 50 minutes while Himmy just “had a dip”. We returned to Bristol afterwards to return the car, passing through a toll bridge. 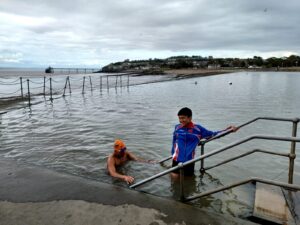 Finally, after the dinner, Himmy and Jason returned to London by coach and I returned to Southampton then Bournemouth by train.