Starting from this race, I will make an evaluation post for every orienteering race I participated, as part of my effort to improve my orienteering skills.

This race was very special, different from typical orienteering race by having the following:

I participated in class MO, which corresponded to ranking class M21. However, I couldn’t finish the course within the 2.5 hours time limit hence couldn’t get any ranking score.

As I started my GPS logger too late, my route to point 1 was not recorded. I normally start my GPS logger in the 2-minute zone, however, I will do it much earlier in the future.

In leg 1, I originally wanted to follow the trail (marked in red in the below map) the whole length because my cross-country ability is crap. However, at the place where the trail is U-shaped, I couldn’t resist my temptation to take a short-cut across a short length of runnable forest (marked in blue), but I wasn’t careful enough and ended up in a wrong direction (marked in purple), which resulted in extra time instead of saved time. 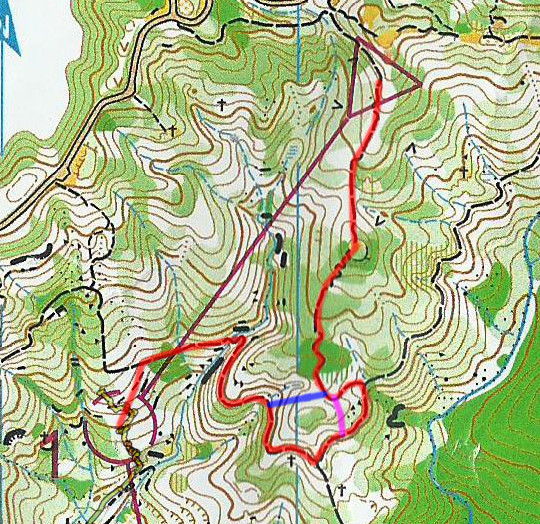 Legs 2, 3 and 4 were basically stream-following, but because my cross-country ability is crap, and also I needed to verify my location multiple times along the route, my time was extremely slow, more than double of the fastest competitors.

On entry to point 5, after the water station, my plan was to enter the control point directly from the east (blue) but I couldn’t identify the entry into the woods, so I ended up following the trail (purple) and entering the control site from the south. 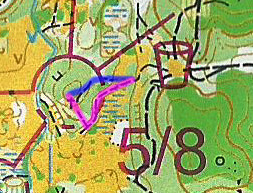 Legs 6 and 7 were easy legs that I made no mistake. However, when I went to control 8, I couldn’t identify the direction at high speed, forcing me to slow down around the region.

After crossing the marsh to control 9, I also searched for about a minute for the control point.

Disastrous mistakes came after control 9. From 9 to 10, I intended to use the marsh as an attack point, as shown in the map below. However, the plan failed as I didn’t realise I was already on the marsh (perhaps because it was dry), and ran all the way down (the purple line). Then I found the mistake because the surrounding was wrong, and had to return. 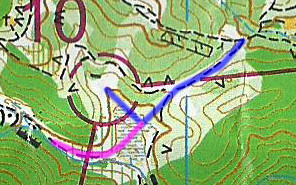 Leg 11 was good, and leg 12 was initially good, but I ruined it just before entering the control. Perhaps I had already used up all my physical fitness, after seeing a building, I misinterpreted the map and confused the large square (meaning tower for overhead wire) on the south and the small square (meaning ruined building) on the west, and ran into the tower thinking it is the small square inside the circle and tried to find a control point nearby where the reality is a dense forest, resulting in about 10 minutes lost. 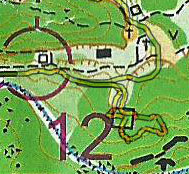 I made no mistakes on legs 13 and 14, but committed a near-fatal one just after I left 14. I intended to follow the blue route on the map below to 15 (the orange route was excluded because it had excessive climb), but I entered the purple path by mistake and didn’t notice even I checked my compass multiple times. The compass bearing was slightly off but still within my tolerance, so I tried to use other features to confirm, but the undergrowth around was so tall so I couldn’t see any other things, and continued running off the wrong path. I realised I was wrong only after a long distance because the hill top near the orange path was too far away. This mistake costed me nearly 15 minutes. 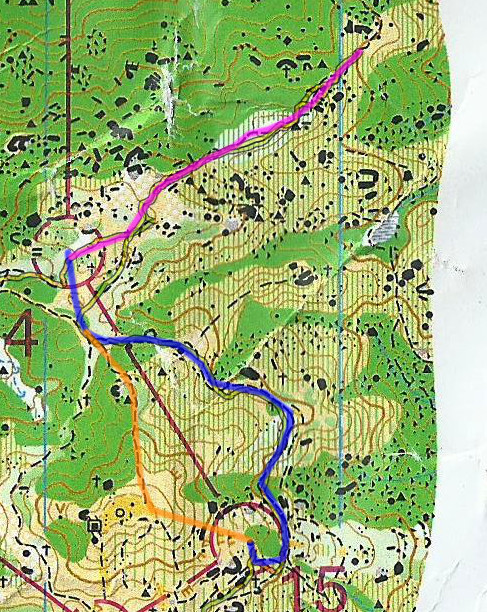 After 16, I didn’t want to risk crossing medium green (marked in blue below) as the time limit is near, so I chose a runnable route even it was longer. 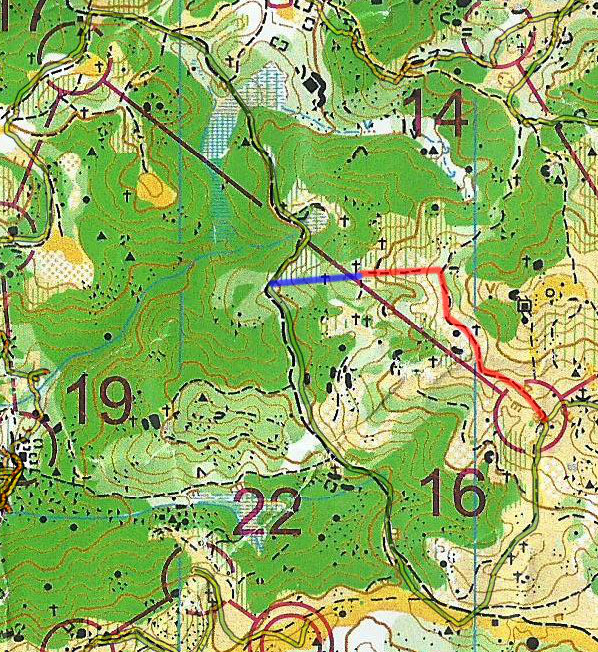 The fatal place was control 19. Although I had little difficulty finding point 19, I was literally TRAPPED afterwards. The blue route was to be followed, but the path to the west was hidden deeply so I ended up at the red point. I saw the stream, knowing I was at the wrong place, then I returned to the original place, tried to find the blue path again, and ended up at the red point again. I found the path at the third attempt, turned left and cross the stream, but the path disappeared once I cross the stream. I searched for a while in the forest, and found the path. However, after I walked a short distance (let’s call there place B), the path disappeared again. Then I tried to find a path to exit the area and couldn’t succeed. I was thinking that I crossed the stream out of the blue path so I walked around to find another place to cross the stream but ended up at the red place again. I followed the blue path again, more slowly to make sure that I would cross the stream at the correct place. However, I ended up again where the path disappeared in my earlier attempt (place B). I looked around more carefully and found that the path wasn’t disappearing, but just blocked by a rock and I could walk over it and continue. I then realised that I was at the orange spot and left the trap after 35 minutes since point 19. 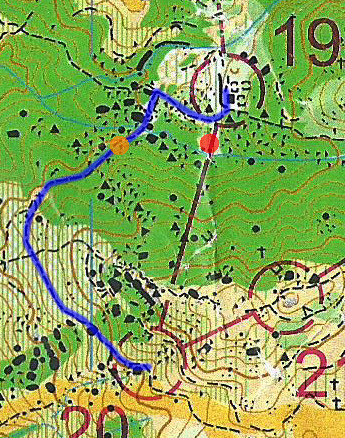 As the time limit was already over, I walked back to the finish. This race is a disaster for me, I hope it never happens again.

More information can be found at the links below: