It was the day for the final race of the trip. Since the race was early, the travel agency arranged with the hotel to have an early breakfast starting from 06:00, because we had to check out before 07:15 if we were not staying afterwards. We were then carried to Cemil Topuzlu Parkı for the race. We had to board 2 specifically-prepared athlete boats at Cemil Topuzlu Parkı, which carried all 2500 of us stripped down to only our swimsuits, to Kanlıca where the start was. Chip timing was used therefore there wasn’t any hurry in the start procedure, and we orderly jumped into the beautiful Bosphorus when the race started.

The water temperature was reported as 23°C which was very warm for me, and the condition was very good, very clear with a little wave and we could look at the jellyfish very deep below and the beautiful swimmers’ bodies around us. This was the most beautiful water that I had ever swum in, but it is not swimmable under normal circumstances because it is a heavy shipping channel between the Black Sea and the Mediterranean, only closed for traffic for the race. The Black Sea water there flowing towards the Marmara was not as salty as the ocean and actually tasted good.

It was the best to stay in the centre where the current was the strongest until we passed an artificial island with a football club on it on the right, then progressively turn right and aim direct for the finish in Europe, not near the European shore too early as there were counter currents near the shore which pushes us back, and not too late to be swept past the finish line. There was a saying that, once you swept past the finish, there was basically no chance of making it.

This was the part where thing became tricky. After passing through the cable line, I felt myself flowing down the current so fast that, not long after that, the football club was already on my right. The water was much cooler than before, which indicate it was very fast. After passing the football club, I started to turn right, however the turn felt like an abrupt turn but not a progressive turn. Because the current was so fast, I thought that if I headed towards the finish I would be swept out to the bridge before I arrived shore, so I turned fast and swam perpendicular to the European shore, letting the current push me to the finish while I was approaching the shore.

Initially I was still seeing the finish balloon became closer and closer, but I was still some distance to shore as I was swimming in the centre until the football club, so I started to increase my speed, or even head a little bit backwards, feeling afraid that I might not reach the shore in time for the finish if I was not fast enough.

Eventually I felt that I was losing forward progress when I started to become closer to the shore and finish, then I knew I had already entered the area of counter current near the shore. I was relieved that I made it in time before I was swept past the finish, and the only remaining thing to do was to sprint directly to the finish.

I finally reached the finish successfully! The result turned out to be just under 74 minutes, which was not fast but still a satisfactory time for me executing the race plan near perfectly. 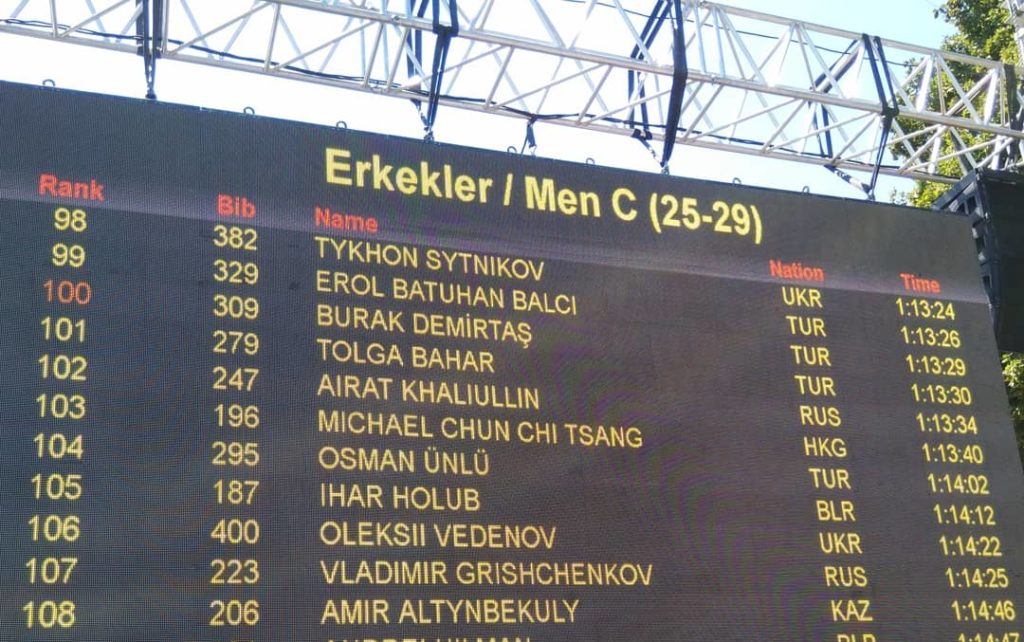 After the race, we had a lunch with our groupmates. Afterwards they went to a bar to have some beer, but as I don’t consume beer so I visited a shopping centre instead. Finally we went back to the hotel to have an informal post-race drink, concluding our tour.