Today I did a marathon swimming race, Clean Half, in Hong Kong despite the escalating social unrest which effectively put the city under martial law as the MTR was destroyed (but nearly all buses still ran as usual), malls closed, and many events (including scouting activities, orienteering races, triathlon training, lifeguard exams) cancelled with a short notice. It is a 14 km (claimed to be 15 km by the organiser, but satellite image showed the course to be about 14 km) race held bi-annually (the other is called Cold Half, referring to the winter weather), from Stanley Main Beach, around Stanley Peninsula to Deep Water Bay. The race is usually done in team of 5 (with a support motorboat with the switch done every 20 minutes in the first rotation, then 10 minutes afterwards), but it can also be done in team of 2 (where the swimmer and the support paddler rotate every 30 minutes) or solo (a “proper” marathon swimming race, with a support paddler). 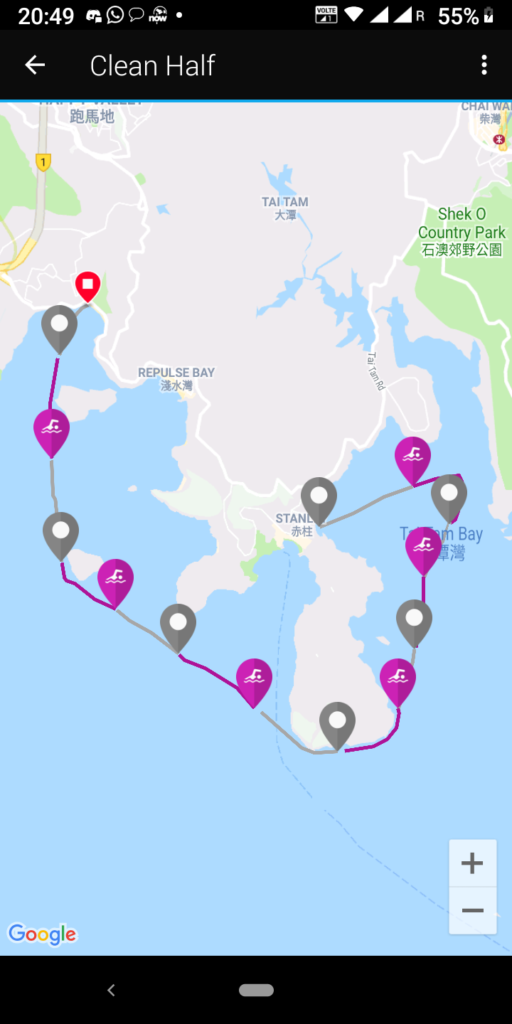 Although the distance (14 km) was not a concern for me (I’m a marathon swimmer, did a 13 km race across the width of Lake Geneva this July), I didn’t do a solo this time because my concern about the hot weather in October. The air temperature was 31°C and the sea temperature was 29°C when I did the race, in which overheating is a very real concern for me and I don’t have confidence swimming 14 km on my own in this hot weather. There was no wind today, which was a history since the race started in 2008, therefore we didn’t need to avoid windsurfers inside Stanley Bay. However, I don’t want to miss the opportunity to familiarise with the environment to prepare me for an eventual solo in the winter (my plan is to do it the coming winter, 3 months later), so I invited my coach and orienteering friend Gary Lui to do the race as a team of 2, named Crazy Orienteers, where we switch every 30 minutes so I have a chance to cool down every 30 minutes.

The race started at 11:00 when most people started, but slower people could choose the first wave which started at 10:00. As we both were very slow, we started at 10:00. We estimated that our swimming speed was about 2.5 km/h without current. The marine current prediction estimated that the current would be with us most of the time so I initially estimated we would finish in 5 hours. Gary swam first and I followed after 30 minutes, rotating every 30 minutes until the finish. We swam towards To Tei Wan first, then rounded a buoy there. However, the current prediction was wrong and we encountered bad current there, and our effective speed dropped to below 2 km/h until we arrived “the wall” (the southern tip of Stanley Peninsula from Tai Tam Tau to Bluff Head). We had already took 3 hours from the start to the wall (about 5.5 km) which my initial prediction should be around 2 hours. People starting at 11:00 started passing us. The strong predicted current with us did not appear afterwards and we could only get up to 2.6 km/h effective speed after passing the wall. However, even this speed could not last long, as we were too slow getting there, the current turned again after about 15:00 and slowed us down to about 2.1 km/h until we rounded Round Island (about 10.1 km, 5 hours cut off point, and we passed there at nearly 5 hours). As we approached the finish and entered the bay, our speed restored to about 2.8 km/h, and we arrive the finish at 6 hours 24 minutes and 6 seconds, the last team of 2. We initially hoped that we could finish in 5 – 6 hours but we didn’t meet the target. The winning time was 4 hours, 12 minutes and 51 seconds. 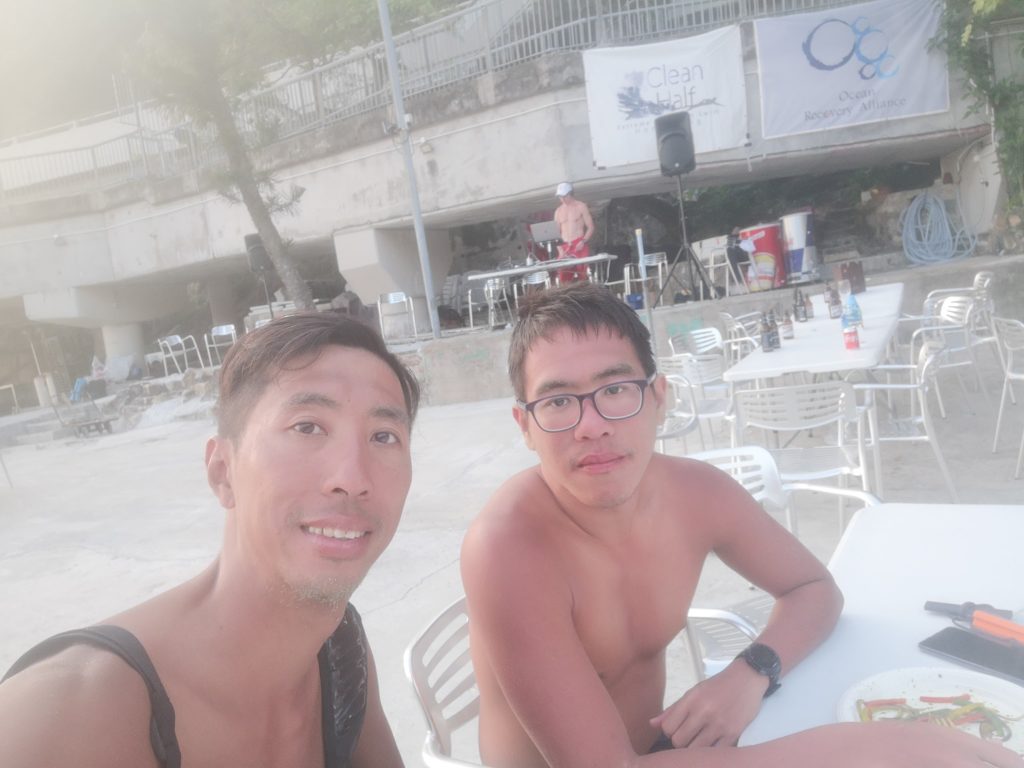 In the solo category, there are a few veteran marathon swimmers, including Edie Hu (USA) and Alice Sagar (New Zealand). Also notable was Alex Fong, who was preparing for his 45 km Hong Kong circumnavigation next month and joined the race after swimming 15 km from Deep Water Bay to Stanley from 04:30 in the opposite direction of the race course (with a few others including Edie Hu). This was his first marathon swimming race and he got the overall champion, completing the course in 3 hours and 44 minutes. 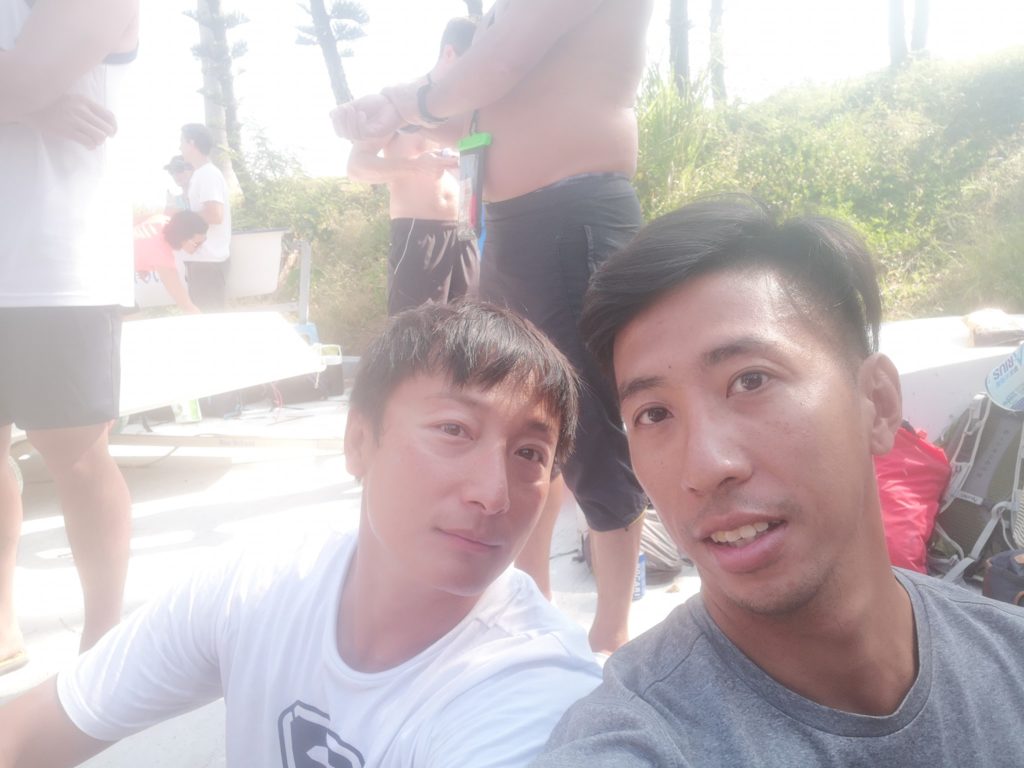 In the teams of 5 category, the team from Tritons, the triathlon club that I’m in, The Nasty Girls, completed in 4 hours and 34 minutes, and the winning time was 3 hours, 17 minutes and 28 seconds.

Although I completed the race, the result did not give me confidence in doing a solo next time as I was too slow. I really want to do a solo next time because I will use it to consider if I’m ready to prepare for my ultimate dream, swimming the channel, due to the similarity between the race (a 14 km race, expected water temperature 15 – 18°C, and I expect to complete it in around 6 hours) and the qualification requirement of channel swimming (6 hours swimming under 16°C). I just don’t know why I still can’t see any speed improvement over a year of swim training. I’m now seriously considering if I should change to another triathlon club which uses a different methodology in swim training. My next race will probably be MMIC (a 3.7 km race around Middle Island) next month which I did it last year as my first serious open water swimming race when I just started my swim training, and I will see if I get improvement when compared to last year, on the same course by cross-comparing the results with the people who do both years.

P.S. The race was held by Doog Woodring in support of Ocean Recovery Alliance, the mission is to reduce plastic pollution in the ocean. One of the solo participants, Daniel Vanderhave, is also doing a Hong Kong circumnavigation in November to raise money for the charity. The amount of pollution is worrying as I collected quite a few piece of junk when I did the race.