The government has a policy to use railways as the backbone of Hong Kong’s public transport system (以鐵路為骨幹, alternatively railway priority policy, 鐵路優先政策), which since 2007, apart from a few secondary railway systems (the tramway and peak tram), have been operated by the MTR Corporation, with the MTR metro system forming the backbone supplemented by a few auxiliary services such as Light Rail and Ngong Ping 360.

This is nicknamed “railway-protection policy” (保鐵政策) by the transport community in Hong Kong. It’s origin can be traced back to 1980s with a policy called “Public Transport Inter-modal Coordination Policy” (公共交通協調政策), which heavily restricted the opening of bus routes parallel to railways, e.g. forbidding routes from N.T. public housing estates to go past Sham Shui Po / Tai Kok Tsui into city centre, and forbidding direct routes between N.T. and Hong Kong Island. The policy was cancelled after the MTR was overloaded.

However, although this policy no longer exists, in recent years whenever there is a new railway come into operation, the government plans to adjust, modify and cancel bus routes serving the area despite some of the routes not overlapping with the new railway and with significant portion outside railway coverage. For example, in 2004 the government once planned to cancel the express bus route 681 between Ma On Shan and Central after the opening of Ma On Shan Rail, despite extremely high patronage of the route and no substantial overlap with the railways, which faced fierce opposition by the community and subsequently abandoned. The route remains popular today, more than a decade after the opening of the railway.

However, the residents of Pok Fu Lam were not so lucky. In 2015, the bus route 43X connecting Wah Kwai and Wan Chai North was forcibly cancelled in the reorganisation plan after the extension of Island Line to Kennedy Town without an alternative in the critical parts of the route. The route served in sequence Wah Kwai – Pok Fu Lam – Kennedy Town – Central – Admiralty, extending to Wan Chai North outside the operating hours of the express route 46X (which operated Tin Wan – Wah Kwai – Pok Fu Lam – direct to Wan Chai North but also cancelled on the same day). Only the section between Kennedy Town and Wan Chai was in overlap with the newly-opened railway, in particular, Wah Kwai and Pok Fu Lam were not served by railways, there was no other direct service between Wah Kwai and Queen Mary Hospital, and no other low-floor bus service between Queen Mary Hospital and Kennedy Town apart from the airport route A10. The government claimed that it would be replaced with route 43M (Tin Wan – Sandy Bay – Mount Davis – Shek Tong Tsui), which aimed to connect the community with Kennedy Town Station but it does not serve Queen Mary Hospital and it is more circuitous. In fact, just before the cancellation, route 43X was the most direct route to connect Wah Kwai / Tin Wan with the newly-opened Kennedy Town Station, passing through Queen Mary Hospital. This again met fierce opposition from the community but the route was eventually cancelled, and the bus company only offered a limited hourly service 43A which ran at limited hours to partially replace it with great reduction in previous service standard (20-minute headway for route 43X), which was subsequently cancelled in less than a year with extremely low patronage.

Starting from June 2019, the proposed anti-extradition law amendment sparked a social movement to protect the freedom which the law amendment would take away. The government initially refused to retract the amendment, and the violent action of police caused much more people to go on the street for demonstration, with the peak number reached 1/3 of the city population, filling all streets from Central to Fortress Hill fully. The police violence increased every time. At that moment we were considered safe if we “escaped” into the MTR station where tear gas can’t be used. People even bought extra single-journey tickets to help fellow citizens “escape”. The scene below remained until mid-August. 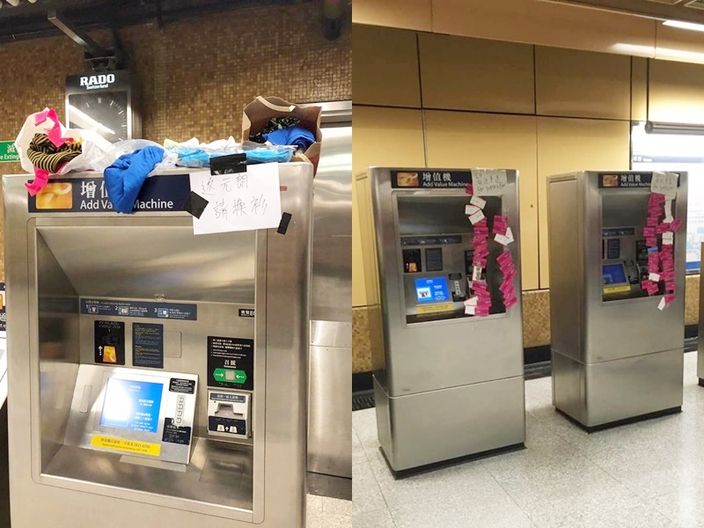 However, on 2019-08-22, an article from People’s Daily, the official newspaper of the central government, blamed the MTR for offering “special trains” to carry people away every time when there was a conflict outside. Then two days later, the MTR suddenly announced closure of stations even before a legal demonstration began, and police were found to be resting in the closed stations. The attitude of citizens started to change, thinking the MTR was actually serving the Communist Party, rather than the mass of Hong Kong. At the end of the month, a violent police attack occurred in Prince Edward Station. Journalists were prevented from entering the station, casualties were transported by train to elsewhere before admitted to ambulance, and the MTR refused to release CCTV footage inside the station when the attack happened. Starting from that time, people started thinking the MTR was not even a “safe” transport (despite no passenger fatalities ever happened since the electrification of the railway network in Hong Kong), called the MTR (Mass Transit Railway, 港鐵) as “CTR (Communist Transit Railway, 黨鐵)”, boycotted it, and some people even acted illegally such as evading fare and damaging it.

I mostly live in Mong Kok, with 4 MTR lines near my home, I used it extensively due to its efficiency to get me to places without affected by the traffic congestion especially across the harbour. However, station closures had become a common occurrence which forced me to use other transport, with the worst day being 5th October (I did a marathon swimming race on that day with 100% turnout).

From November onward I dramatically reduced the use of the MTR. However I didn’t went with a full boycott and took 6 trips in the month. 1 trip was because I was in a hurry to get to Kwun Tong but missed the ferry at North Point, leaving me no other choice (not even taxi) but the MTR, 4 trips were between Admiralty and Mong Kok / Prince Edward where the railway was undisputedly the most direct way, and one was on Light Rail between Hung Shui Kiu and Tai Hing where the Light Rail had a monopoly which still stands today and no other choices exist.

In December, I took 4 trips. The 1st was from Mong Kok to Kennedy Town early in the morning when bus 904 and the Kennedy Town – Mong Kok red minibus had not yet started operation. The 2nd was from Jordan to Mong Kok. There were other viable choices but the metro was the cheapest and fastest. The 3rd was from Mong Kok to Ocean Park which I mostly replaced it by taking bus 171 instead, but sometimes the tunnel was so congested that I had to take the MTR to be on time. The 4th was again Admiralty to Mong Kok, a standard route which the MTR has a vast advantage.

January was the month when I came very close to completely boycotting it. However I ended up taking 2 trips, Hung Hom to Lo Wu and Lo Wu to Sheung Shui, which would require great detour rerouting via other border checkpoints if I had to avoid that section.

Finally I gave up in February and took a few round-trips between Mong Kok and Whampoa. From Mong Kok to Whampoa the new metro was a 5-minute journey coming every 4 minutes in peak hour, compared to 20+ minutes on the bus 30X coming every 20-25 minutes or even more, and in the return journey, I started in Hung Hom Bay. In the past I could take bus 212 back to Mong Kok. However it has been cancelled due to overlapping with the new railway, leaving the long-haul route 30X which charges a high fare to the New Territories as the only point-to-point route to Mong Kok, and my alternatives were to walk to the cross-harbour interchange of Hung Hom Station, paying $6.1 for a 15-minute bus journey to Mong Kok, or walk similar distance to Whampoa Station, paying $5.5 for a 5-minute MTR trip to Mong Kok. I ended up choosing the latter.

Adding salt to the insult, the swim squad training by Fenella resumed at Repulse Bay due to pool closure as a result of COVID-19 outbreak. At the beginning when I moved to Mong Kok, I generally took the MTR to Admiralty then Ocean Park and transfer to bus 73 to get there. However if the tunnel was not congested I took the express bus 171 instead to Ocean Park because it was faster and cheaper than taking the MTR, and my use of bus 171 instead of the MTR had gradually increased, achieving full usage of the bus and no usage of the MTR in January. As the tunnel was not congested early in the morning, my choice to get there was to take the 171. However because the training was held so early, in order to get there on time, I had to take the departure which passed Mong Kok at 06:08 and operated as N171, and the next departure would arrive at about 06:20 and operated as 171 but it would be too late for me. The implication of the letter N was a much higher fare ($17.7 instead of $11.9). I eventually gave up and took the first MTR which departed at 06:10 and charges $12.2.

Therefore, it is impractical for me to boycott the MTR because in order to do so, I may need to pay much higher bus fare or take much more circuitous routes, but will prefer direct bus routes even in some cases the MTR is faster. For example, I am still taking bus 904 between Mong Kok and Kennedy Town, 905 from Sheung Wan to Mong Kok, and bus 171 between Mong Kok and Ocean Park, but will take the MTR for cross-harbour journeys originating from Admiralty.