The hostel I booked was near Victoria train station, thinking that it would offer fast travel to Tooting Bec Lido which is right beside the railway line between London Victoria and Brighton. However it turned out that the fastest way to travel there was to take the tube on the Victoria Line then Northern Line to Tooting Bec, and then transfer to a bus there rather than using a National Rail train.

As off-peak travel starts at 09:30, I waited until exactly 09:30 to enter the tube station, which made me just in time to arrive the lido at 10:00. The programme I did was just 2 continuous swims – 33 lengths (approx. 3 km), toilet break, then 22 lengths (approx. 2 km). However, my speed dropped continuously over time. I took about 21 and a half minutes for the 1st km, then 23 and a half for the second, then 24 and a half for the 3rd km. After the toilet break, my 2 km averaged 24 and a half for each as well. This was much slower than I expected as I swam a 1500 m in the pool in about 27 minutes before I emigrated to the UK, so it would be about 18-19 minutes for each km, possibly 20 in later stage. This further confirmed that I had seriously lost endurance and speed after emigrating to the UK.

After swimming, I ran the MapRun long course, then returned to Leicester Square again for dinner, and I visited a high-class restaurant this time. Not long after dinner, Kate replied me that the swim was on and we would meet at 01:30 12 August at Dover Marina, therefore I would need to take the last high speed train at 23:37 to get there. As there were still a few hours left, I started to visit the city, including a place called “Bank”, which originated from Bank of England. This area is now where the headquarters of banks located, the place where all finance professionals want to work in.

Then I went to London Bridge, where a modern office building is integrated into the train station.

Then to Farringdon, the then-terminus of the first metro in the world opened in 1863 (named “Metropolitan Railway” at that time, where the term “metro” came from and eventually adopted into most languages of the world as the word for a high-capacity, fully grade segregated, exclusively passenger railway serving a city), now a station of 3 tube lines sharing tracks and mainline railway (Thameslink) running side by side with gateless transfer between them. 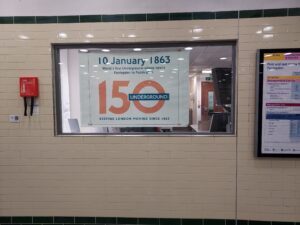 By the end of the day, I took the high speed train from St Prancas, the terminal of Eurostar trains to continental Europe. However, the train I took was a domestic service to Dover which runs at 225 km/h the fastest, compared to 300 km/h for international services.

I was looking forward to Kate’s success in the Channel, which would hugely boost my confidence for me to swim across it next month.