I travelled to Dover by high speed train and met Kate and her dad at the marina. She was very enthusiastic and looking forward to getting across. The boat was Viking Princess II with Reg Brickell as the pilot. We boarded it and got near the Samphire Hoe where she started her Channel swim.

I chased her for her feeding plan and I could finally read it. It was very complicated, listing different stuff every hour until 20 hours and even included drugs and motivational songs in it. 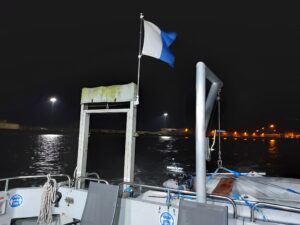 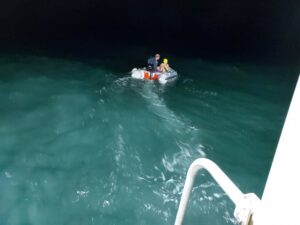 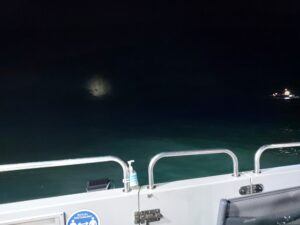 However, not long after she started, she started to look back and forth, then complained it was cold. Also the pilot noticed she was not catching up the expected progress and started to drift off course. She had a huge self doubt and she thought that she was going nowhere. In fact the White Cliff of Dover can be seen even half way into the Channel.

Despite our encouragement, after 2 hours she no longer thought she could do it and refused to swim anymore, and the attempt was aborted. We didn’t even got to the English shipping lane. 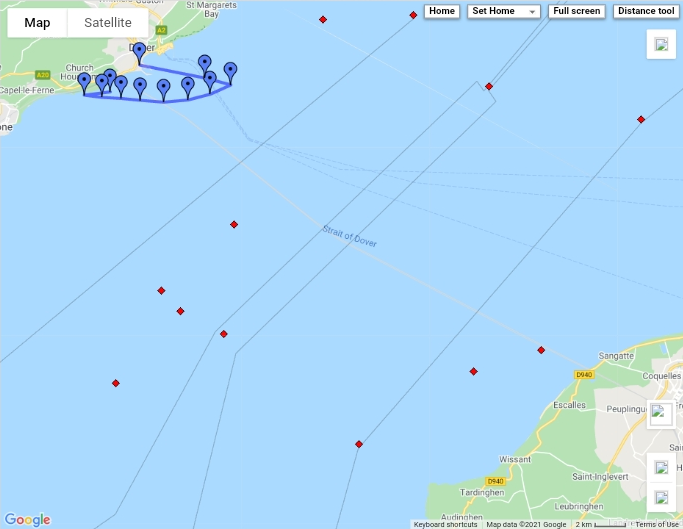 We returned to the harbour. It was totally unexpected. It was still 5 in the morning. As I didn’t have any accommodation booked, expecting a whole day out in the Channel, I had nowhere to go as my train ticket was only valid from 09:30. It was the saddest moment in my life. I just sat on the beach hoping to find someone to chat with me but no one was there. I finally called my mentor Simon and chatted with him.

At about 8:00 I went in for a short swim, then I left the sad place, headed to Folkestone and met my pilot Peter Reed (Rowena). I mentioned to him that I was even slower than before and he also told me he wouldn’t bring me out on a spring tide. Then he invited me for a tea.

Then, the pilot of Kate’s swim, Reg, appeared. They started to talk about what happened this morning that a swim terminated just 2 hours into it. Then Reg told me that the swimmer (Kate) told him that her speed was 4.5 km/h! That’s ridiculous!!! That’s elite level speed and she’s no way swimming at that speed. If that was true it would not be possible for me to keep up with her in the 6-hour qualifier. However, she told me that she was a slow swimmer instead. I estimated her speed to be about 1.9 km/h because, in the 6-hour qualifier, I swam at a very slow speed (probably less than 2.3 km/h) and she still couldn’t catch up that eventually I had to swim circles around her to avoid getting cold, while Ali, a very experienced crew at Durley swim group, thought she swam 10 km in 6 hours. As she told me that she was a slow swimmer and this was the fact, I was prepared for a very long day out in the Channel, probably up to 24 hours.

The pilot’s job is to bring the swimmer safely across the Channel, and he needs to know how fast the swimmer is in order to plot an appropriate course across the tide. That meant she had already been doomed at the beginning. I was so damn angry at that moment because she was wasting my time. I didn’t even care about the £31.2 train fare getting to Dover and back at that time. I initially thought there was a miscommunication between her and the pilot, I texted her, explained to her that 4 km/h is elite level speed but she still insisted that she was a 4 km/h swimmer. She told me that’s her speed when she was trained with someone for a shorter distance. I told her if she still insisted her unrealistic speed I wouldn’t crew for her anymore, and she told me she wouldn’t need me anymore as well. Our friendship was over.

I booked a cheaper youth hostel (which only accepted guests up to 35 years old) in northwest zone 3 of London, took the high speed train back from Folkestone and arrived there. I was so tired after a night out on the sea, so I didn’t explore a lot of places at that evening. I took a bus to Ealing Broadway and it took me about an hour to travel from northwest zone 3 to west zone 3 because of traffic congestion and the lack of motorways in the city, and there is no direct rail connection. Afterwards, I went to Wimbledon to try out the tram, then went across the city centre back to the hostel, and it took me also nearly an hour on the metro across the city. London is a large city but because it’s an ancient city, it was not designed to carry fast motor traffic in the city’s streets unlike cities built in the modern era with elevated motorways in the heart of the city.