In my 5 years of orienteering life, I mostly participated in individual race in my own, with only very few team races, because finding teammates was very difficult. This race, “Festival of Sports Orienteering Relay”, is held every year, but I didn’t bother to join because I was not confident about my ability to finish the race. However, as my technique improved, I would like to join the race this year. I looked for teammates among my club, other scouting friends, and also my ACM-ICPC teammates, but everyone was busy travelling, doing expedition, camping, etc., in the Easter holiday, or had already got a team at the moment I contacted her.

Luckily, at the MetOC ranking event in Tai Po, a couple, Hanifa and Raymond, approached me looking for the third teammate for entering the MIX (men and women) class. As I would also like to find a girl to enter the MIX class, I immediately agreed and filled in the online application form, which was on the due day already. We agreed to have me run the first lap, Hanifa the second, and Raymond the last. This arrangement was critical to our success in the event, explained later on.

Relay orienteering is different from individual orienteering that the competing units are teams of 3 (teams of 4 with at least 2 women for sprint relay). In individual orienteering, because everyone in the same class is running the same course, interval start is used to minimise following. However, in team orienteering, the situation is different. The teams of 3 are competing head to head, where everyone in the field are running similar but different courses, but the combined course of every team are the same, which forms the basis of fair competition. Mass start is used, therefore the one crossing the finish line first is the winner, but because everyone is running a different course, he cannot blindly follow the others and must use judgement to decide. 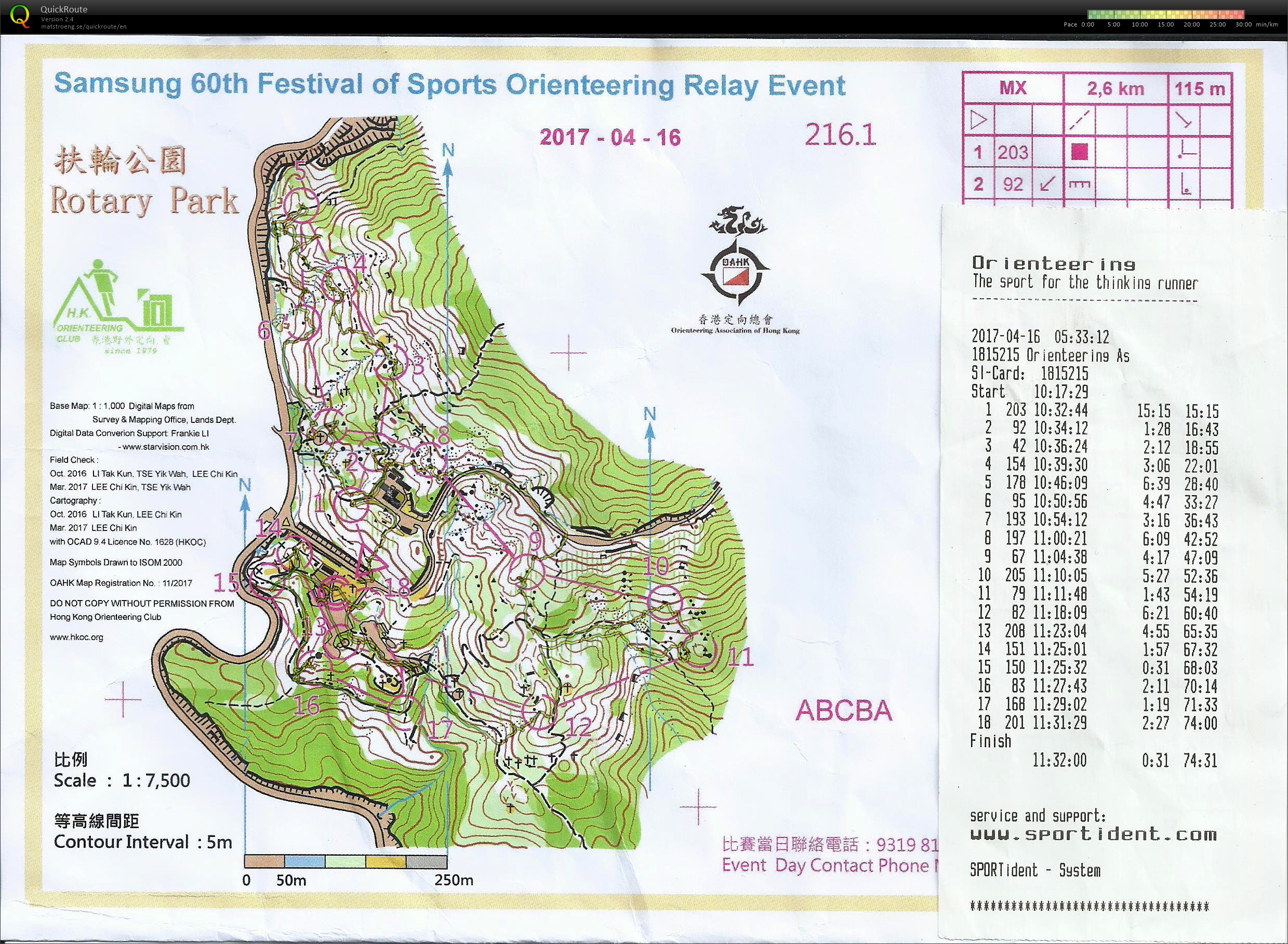 Note the string ABCBA in the above course. It indicates the variant of my course, which means the course contains 5 forks starting/ending with common controls with 3 variants each (labelled A, B and C), and I run variants A, B, C, B and A for the 5 parts in order. The length of the parts and the variants are unknown to the competitors, except that over all 3 laps we run all variants A, B, C for each part.

Because I am bad running in the woods, I did my course slowly in the event, but I still went wrong at a few places:

From 3 to 4, I aimed at a wrong rock having another control, but corrected immediately after checking the code, only minor mistake here, but after 4, I tried to go straight to 5, but I deviated from the correct direction, couldn’t find the path and the spur and got lost. Also I had to stop and check feature many times from 5 to 6.

From 9 to 10, the technique of following came to play. After crossing the stream on the west of 10, I saw a competitor in another class going up the wood to a cliff in the direction where control 10 was in, so I followed him hoping that the cliff he was going was the correct cliff, and the result was really correct. I read the map to control 11 when going up the hill, therefore I immediately walked down at full speed directly in the correct direction aiming the hilltop of control 11 and passed him, then he in turn followed me to my control 11. I checked the code was correct, punched it, and left the control, but when he saw the number he found that it was out of expectation (because his control was different, not directly at the hilltop), and immediately got lost. This clarify the importance of locating myself continuously even when following someone.

I mass started at 10:30, and had to return before 12:00 or else my next teammate would mass start. Despite the mistake I made, I returned to the finish at 11:32, nearly half an hour before the mass starting deadline of the 2nd lap. Hanifa ran 92 minutes for the 2nd lap, more than the 90 minutes time allocated for each lap before mass starting the next, but because I returned early in the 1st lap, she still returned on time to start Raymond normally, who ran 64 minutes for the last lap, resulting in a total of 3 hours and 38 minutes and got the 3rd place, where only 3 teams could finish the race normally by relaying all the laps. The placement was crucial to our winning because the 4th team, although the overall time was slightly faster than us by 16 seconds, the 1st teammate ran overtime for 100 minutes, therefore couldn’t make her way to the finish at the mass starting deadline for the 2nd lap, even the remaining two laps were completed in about 59 minutes they had to be ranked below us, effectively giving their prize to us.

I think it was plain luck that we got medals in this event, because that among the 15 teams that started, 10 teams got disqualified (most probably because of mis-punches), 1 team ran overtime, and 1 team mentioned above ran over the mass-starting deadline because of the ordering, resulting in only 3 teams completing the race normally. Actually we were very slow, only hoping to complete the race, but completing the race is enough for the prize.

The result is posted below, note that the total time for the 4th place is less than us at the 3rd place:

And here is my GPS trace: