The 3rd sprint orienteering ranking event was held in Fung Shue Wo last Sunday. The venue was fun, including both park and village terrain in the same competition, with legs of different lengths mixed together demanding high level of concentration in the race.

I ran the M21 course, with my target at 800 marks hoping to return to élite class next year. I performed well in the initial half, with only little mistake made, but my performance turned bad in the final part of the race, which made me not achieved my target. As usual, I have recorded my GPS trace for analysis. 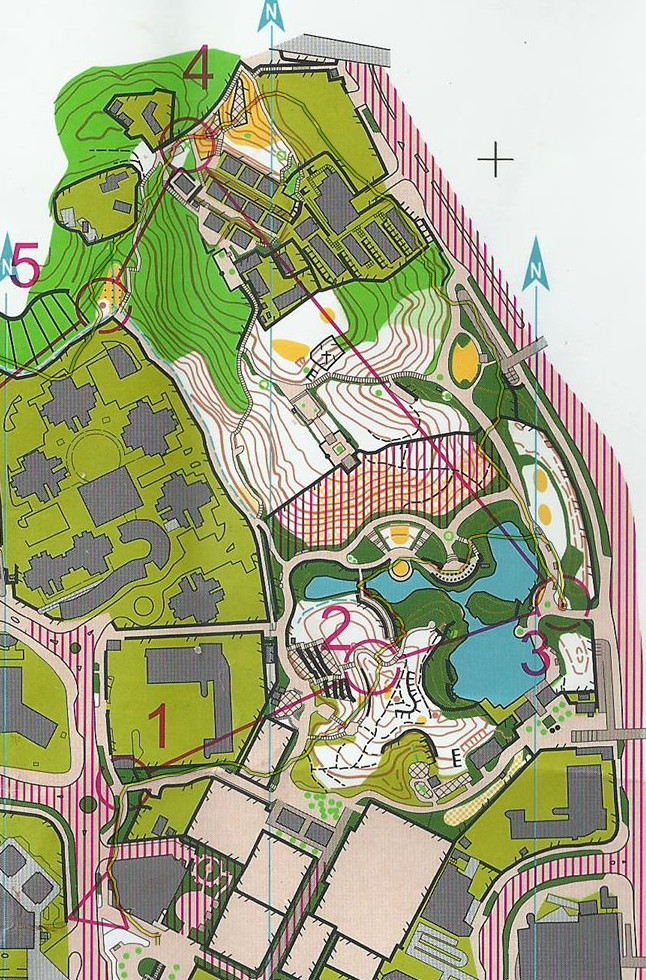 There was no route choice and little skill involved in the first 2 legs, serving as an introduction to the terrain. From 2 to 3, it seems that crossing the northern bridge is the only viable option, so I took it and ran along the edge of the lake (marked in magenta), not realising that a shortcut (marked in blue) could be taken. 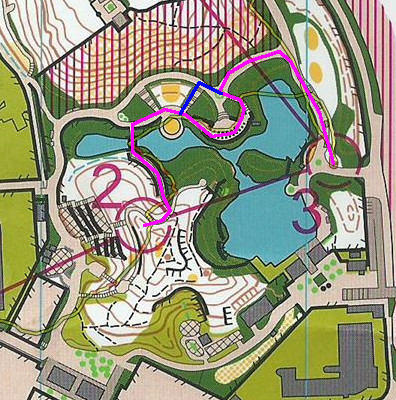 There are two route choices from 3 to 4, the orange and the blue routes: 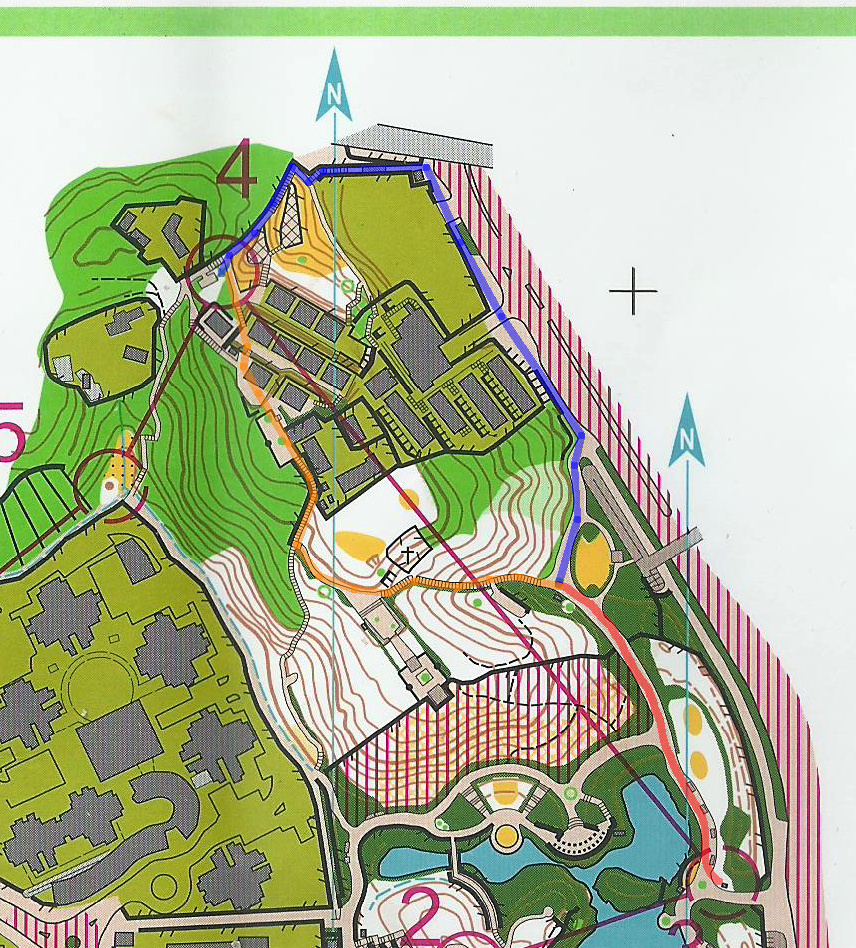 I took the blue route simply because there were less contour lines as I am extremely bad in running uphill.

Controls 5 and 6 simply guided the competitors to another part of the arena, which is a village. Although there was really no technique in these 2 legs, I didn’t have the confidence to run full-speed along the drainage, and slowed down once in the process. 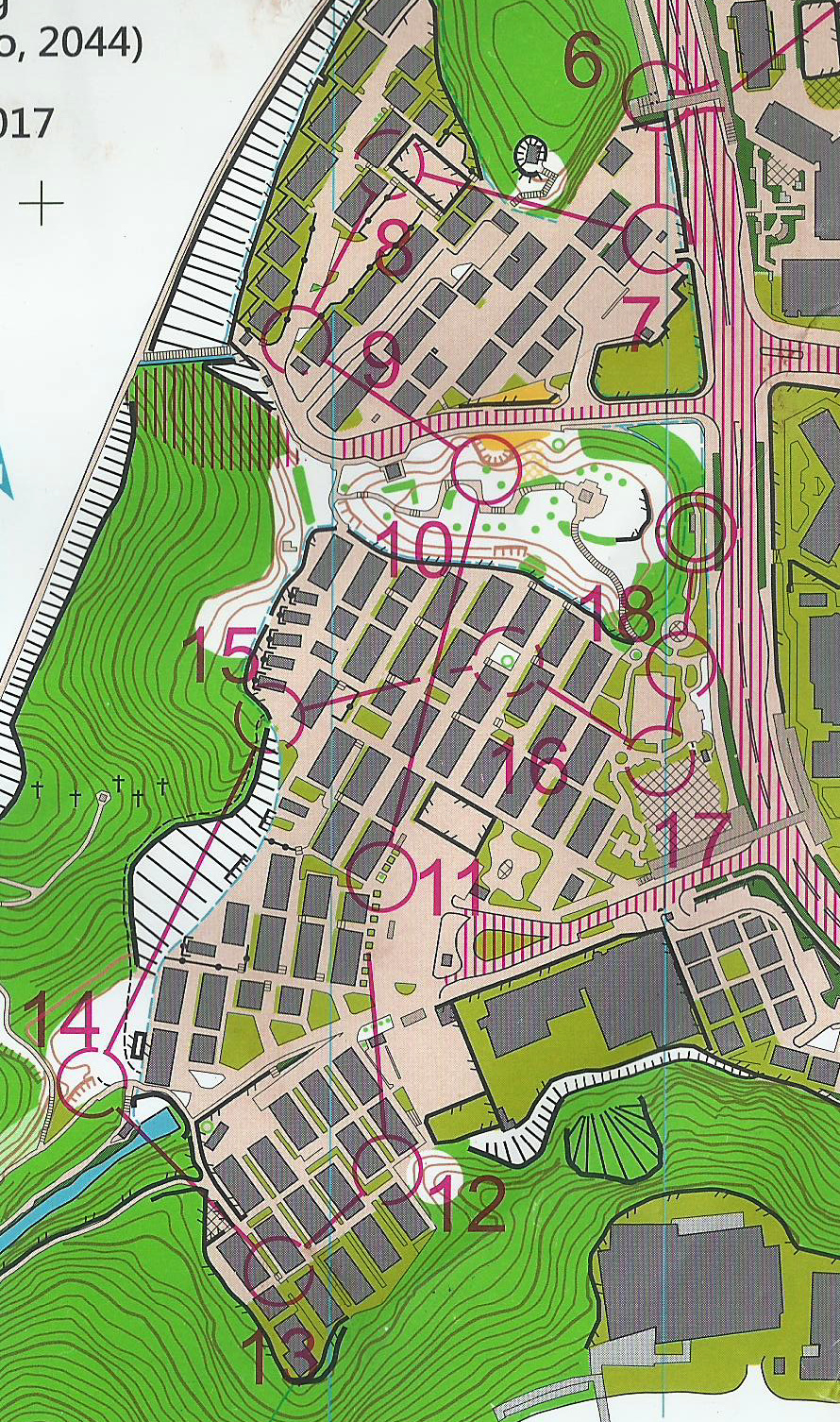 Control 7 was simply about running directly to the target in the right direction.

Control 8 was also easy by just recognising the high fence.

Then I ran to 9, 10 and 11, but after these easy legs I overspeed, missed control 11 into halfway of leg 12, and abruptly stopped when I saw an inappropriate geometric shape. I had to U-turn to the control and U-turn again to continue. Afterwards, I slowed down and jogged carefully to point 13, and passed the trap carefully to point 14. (If you turned left too early after point 14, you would enter the path south of the river.)

My performance turned bad from here onward. I attempted to run along the drainage to point 15, just like what I did to point 6, but this time the runnability was extremely poor. Moreover, I didn’t realise that the line symbol ending at point 15 was a high fence, rather than a high cliff or wall, therefore I stopped somewhere in the leg for nearly a minute trying to locate myself, and proceeded extremely slowly. Despite that I slipped and hurt my leg.

However, this was not the end of my bad story. I planned to turn right immediately after point 15, follow the blue route, turn left just before reaching a fence to point 16. However, I ran to a fence outside a park and became lost immediately, and had to return to the original position to re-orient myself. I found out later that I didn’t exaggerate my right turn enough to the blue route, and ran the red line instead. 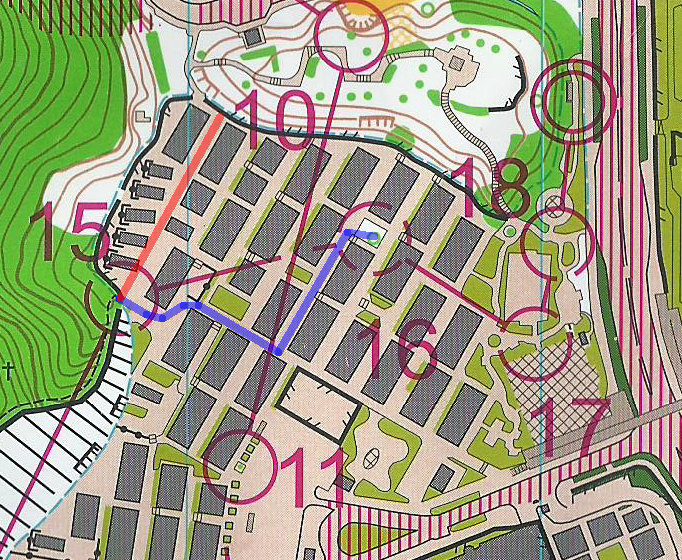 I even didn’t know which path I was following in the process to point 17, then it was the end of the race.