Today is the big day of Alex Fong’s round Hong Kong circumnavigation swim, a 45 km charity swim for A Drop Of Life which set up infrastructure to give clean water in under-developed places.

The first recorded round Hong Kong swim was in 1976 by Linda McGill, an Australian female swimmer, from Repulse Bay rounding the island anti-clockwise in 17:06:00 (that swim was sponsored by Cathay Pacific, and she was notable by swimming topless most of the way). In recent years, the swim is facilitated by HK360 by Shu Pu, with Simon Holliday making the inaugural modern HK360 swim on 2017-11-11 in 12:34:00, from Sai Wan Swimming Shed clockwise, raising fund for Splash Foundation. On 2018-11-03 Edie Hu repeated the feat as well, then a relay team The Drifter also in the same month, also raising fund for Splash Foundation.

I started serious open water swimming late 2018 and Edie’s circumnavigation really inspired me. At that time, 45 km was out of my imagination while I was doing a 3.7 km race on the same day, which was my longest swim at that time. She had became my idol since then.

As I really love open water swimming, I began to set challenging targets for myself. The first target for me, which was set on new year of 2019, was to become a marathon swimmer (i.e. to complete an official >= 10 km swim) before March 2020 (i.e. 15 months for me to achieve my target). I also started to read more about those famous channel swims like English Channel, etc., but it was too early for me to even think of it. I have completed my first marathon swim in July 2019, in less than half of the time I originally planned to achieve my target.

I noticed that there have been no Hong Kong swimmers (in terms of nationality) completed the English Channel, or any of the Ocean Seven, or any of the channels / solo channel-style swims I knew, not even the “home” swim Hong Kong circumnavigation (the 3 round Hong Kong swimmers are Australian, British and American respectively) (although I know a Hong Kong swimmer who has done the Gibraltar Strait in wetsuit). All the Hong Kong marathon swimmers I found out only do races, most of them are elite swimmers doing FINA 10 km races. I started to think about who might be the first Hong Kong swimmer rounding Hong Kong Island and I could only think of very few possible people, like Chun Kong Mak, who do long-distance open water swimming and also are Hongkongers. I also daydreamed about my dream swim – a Hongkonger and HKU alumni training in HKU doing Hong Kong circumnavigation swim, starting and ending at Sandy Bay near HKU training base Stanley Ho Sports Centre, how magnificent this swim is symbolically! However it was still too early to realise it as I didn’t have enough experience yet (with only one marathon swim in a lake which was not cold), and still need one more winter to build my experience and endurance (as summer in Hong Kong is too hot for me to swim for long). If I perform well in winter 2019 – 2020, I may realise my dream the earliest winter 2020 – 2021, depending on my other life goals like having a year of working holiday in Europe, swimming the English Channel, etc., which any of them require great budget and dedication.

Suddenly on August 2019, Alex Fong, a former Hong Kong Olympian swimmer, announced that he would round the island today (2019-11-05). This actually shocked me as he was not known to be an open water swimmer, yet doing something even longer than the English Channel in just 3 months of his initial open water experience, and he is doing MY EXACT DREAM SWIM (a Hongkonger and HKU alumni, previously trained in HKU, doing Hong Kong circumnavigation swim, starting and ending at Sandy Bay near HKU training base Stanley Ho Sports Centre). Now he becomes my new idol, compared to Edie’s swim when I was still new to swimming, now I’m a marathon swimmer and can feel much more about the swim. In addition, Alex likes to take selfies and his Instagram is constantly refreshed with his training news which I follow nearly every day. I feel like I am reading a 3-year long story of someone training to swim the channel in 3 months time, from his initial open water swim, the story of getting heat exhaustion in the sea, his first 5 km open water race which ended him in the hospital, the double Clean Half which serves as his final long distance training, and the final taper, in Hong Kong which was still too hot for me to do any of these things (the 5 km race which Alex got the 5th and I got the last was brutal for me, and I didn’t have confidence to do the Clean Half solo due to the expected temperature and did a relay instead, which took us more than 6 hours to complete.) The first time I met Alex was in early September in a regular Sunday OW group swim, and he swam so fast that I couldn’t even catch up him.

I went to the start to support Alex today morning. His circumnavigation started at 04:55:01 today. I watched the live stream and also the HK360 tracker all day. 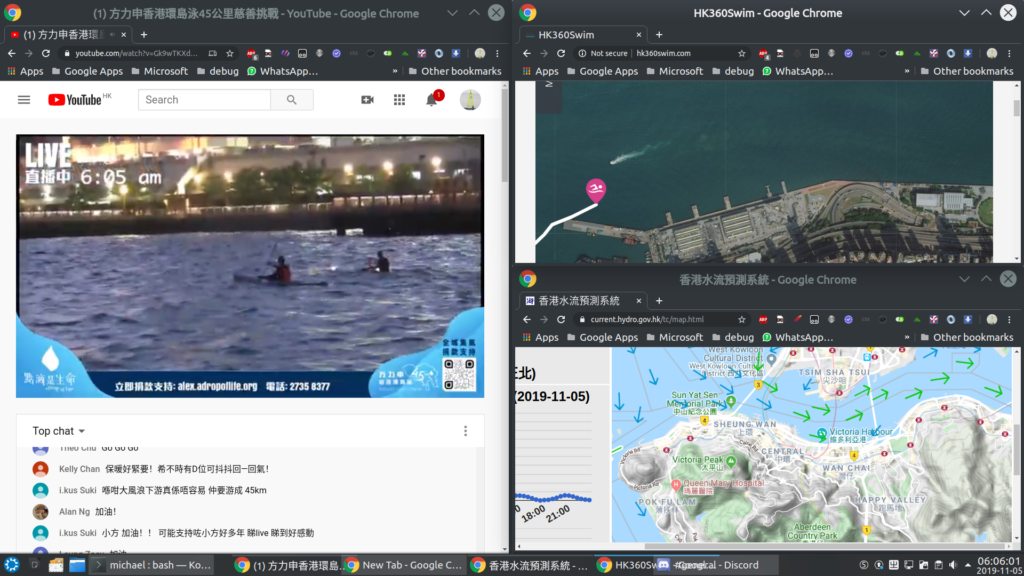 He swam so fast, more than an hour ahead of schedule and closed the loop at 15:38:07, i.e. 10 hours, 43 minutes and 6 seconds swimming time, nearly 2 hours faster than the previous record by Simon Holliday! He has become the first Hongkonger to swim round the Hong Kong Island and achieved MY dream! Also, he has raised more than 7 MILLION Hong Kong dollars for the charity! The history will never forget his tremendous effort!

I eventually want to do this dream swim as well, but it seems so far for me, especially that I will probably need to train for up to 18 hours considering my speed, and unlike Alex there is no way anyone can make me do long distance in this hot weather, in other words I will only train for and do the swim in winter. I consider anything above 25°C too hot for marathon swimming. Therefore, the earliest that I can possibly realise my dream is early 2021, by building up to 6 – 8 hours for 14 – 20 km in early 2020 first.